LORD Samuel Vestey passes away aged 79 in the UK

This article by Jon Condon originally appeared in Beef Central

LORD Samuel Vestey – the last remaining family member with direct connections tracing back to ownership of the vast Vesteys pastoral and meat processing assets in Australia, passed away in the UK on the 4th of February, aged 79.

Samuel Vestey, 3rd Baron Vestey, was born on March 19, 1941 into one of the richest families in Britain. His Australian mother was a granddaughter of opera singer Dame Nellie Melba. His father was lost in action in World War II, so he inherited the peerage at the age of 13 on the death of his grandfather.

Sam and his cousin, Edmond, ran the Vestey worldwide business empire until the Australian assets were sold in 1992.

He was a regular visitor to the company’s Australian operations, and after completing an internship at Victoria’s Riverstone abattoir in the late 1950s, used to joke that he was the “only trained butcher sitting in the House of Lords.” 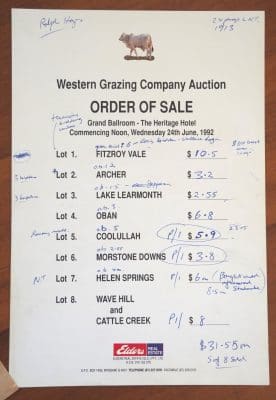 The family’s food empire was founded on meat, but their business interests around the world also included shipping, farming and insurance. Renowned for their tax-avoidance schemes, they owned assets worth, at their peak, more than £1 billion according to the Sunday Times Rich List.

In Australia, the Vesteys had an enormous impact on both the meat process and pastoral industries over 70 years.

In a deal with the Federal Government, they originally took up vast tracts of pastoral land in the Northern Territory and Kimberley regions from 1914. In exchange for ‘minimal rents,’ Vesteys agreed to build an abattoir in Darwin. Between 1914 and 1918 they leased 36,000sq miles (89,000sq km) of northern Australia, including seven breeding and fattening properties – three in the Gulf of Carpentaria, three near Charters Towers and another near Rockhampton.

By the time of their sale in 1992 (Beef Central attended the auction, recording the details on this sale schedule) the grazing holdings included Wave Hill and Cattle Creek, Helen Springs and Morstone Downs in the NT, and Cooloolah, Oban, Lake Learmonth, Archer and Fitzroy Vale in Queensland. In total, the showcase holdings made close to $60 million.

Steve Martyn’s excellent red meat processing history, World on a Plate, records that Vesteys entry into meat processing came via their ownership of the Blue Star Shipping Line, which in the 1930s was a major shipper of frozen beef around the world. The family already had extensive cattle and meat processing interests in South America, but these were decimated by the UK’s Ottawa decision (prioritising imports from Commonwealth nations).

The sale to Vestey proved to be one of the most influential in Australian meat processing history.  It included five abattoirs at Footscray, Riverstone, Forbes, Redbank (near today’s JBS Dinmore) and Lakes Creek, near Rockhampton, together with large export and cold storage facilities at Brisbane, Melbourne and Sydney, and a string of retail shops in Sydney and Melbourne.

Vesteys paid 1.5 million UK Pounds to become the largest meat processor in Australia. The deal would shape Australian processing for the next 60 years. Having bought the William Angliss business, Vesteys introduced new engineering and management practises, chilled beef and canning expertise it had developed in its South American and UK operations – boosting the company’s performance, and by necessity, that of its Australian competitors.

In its heyday, the Vestey family owned a global behemoth that included meat and livestock interests in the UK, New Zealand, Venezuela, Canada, South Africa, France Ireland, Argentina and Brazil, as well as Australia. They owned 2500 retail meat outlets globally plus the Blue Star shipping line, and was arguably the richest family in the UK, after the Royal family.

The Australian business continued to expand after WW2, and by 1992 included large meatworks in Townsville, Rockhampton, Riverstone and Naracoorte, and a national meat wholesale network servicing its own 35 shops, plus major supermarkets and wholesalers. It also processed livestock on a service kill basis at Casino, Grafton, Wingham and Macksville, and was Australia’s second largest processor at the time, after AMH. The Vestey family also had extensive commercial property holdings around Sydney, Melbourne, Brisbane and Townsville that appreciated enormously in value over time, as the cities grew.

The Australian assets – pastoral, meat processing and property – were sold progressively from 1992. The four meatworks reportedly realised $68 million, and were sold to Smorgons. The Vestey grazing properties, run under the flag, Western Grazing, were reportedly the largest individual transaction of cattle holdings in Australia to that time.

Sam Vestey and his wife shared their love of horses with their friends the Queen and the Prince of Wales. He held a senior position in the royal household, Master of the Horse, from 1999 to 2018, and was knighted for his services to the monarch.

Despite his huge wealth, Vestey was revered for his down-to-earth personality. “He taught everybody about meritocracy,” one UK colleague said following his passing this week. “He treated everybody on their merits, not how they dressed, spoke or their background.”

Former JBS Australia chief executive Iain Mars worked for the Vesteys processing business in Darwin in the late 1970s. He also served for a period as PA to Edmond Vestey, Sam’s cousin, in 1981.

“Sam was a great bloke – really down to earth, and people enjoyed his company. He had a deep connection with the Australian business operations, given he was a descendent of Dame Nellie Melba, and was a frequent visitor,” Mr Mars said.

Mr Mars saw him last during a regular lunch gathering of former Angliss/Vestey Australian staff, around 2006.

The relationship between Lord Sam Vestey and Australia has remained strong throughout.

One story recounted in Steve Martyn’s book, World on a Plate, references an occasion when he and some friends were having a quiet ale in a pub in Sydney. When views on Australia were questioned by one local on the basis of “How would you know? – you’re a pom!” Lord Vestey pulled out an Australia $100 note and pointed to the picture of Dame Nellie Melba on the back, saying “she is my grandmother, and that makes me an Aussie!”

Lord Vestey’s mother continued in live in Dame Nellie Melba’s Coombe Cottage in Lilydale until she died in 2011.